What does MISTELFORM SENSIBLE PROZESSE stand for?

MISTELFORM SENSIBLE PROZESSE is a procedure for pulping the mistletoe. It takes up Rudolf Steiner’s attitude towards mistletoe and its structuring in the anthroposophical humanities of later years. Summer and winter mistletoe, i.e. their leaves and berries, in a fluid oscillator are being rhythmicised freely swinging, thus sensitized for each other and blended. This process of sensitization and blending we call MISTELFORM.

Going about this way, a substance of a completely new quality is created. A quality which may also induce people to harmonize inner polar opposites thus compensating them. Processed into massage oils and body lotions, the “new mistletoe” harmonizes opposites, induces autoactivation and forms a protective shell.

”It is the way substances are treated

which is essentially of utmost importance.

One has to stop thinking

that the remedy is to be found in the substance as such.”

A novel approach to our health

The swinging process in the oscillator can also be observed as inherent law in other areas of life. The secret of a live organism lies in every organ being sensitive to perceiving all the other organs. At social level, it is the interest in the spiritual aspect of the other person.

Only if we succeed in interchanging our way of thinking with one another, will we be able to find ourselves united with each other in the spirit of a common task.

This procedure represents the process of the development of the human inner self. One’s autoactivating inner self starts relating to the world, to one’s own organism and to the other human being thus uniting in self-recognition thinking and wanting, living and experiencing, one’s inner self and the world.

MISTELFORM describes a principle that, even though originating from the mistletoe, it reaches far beyond it. As far as the mistletoe as such is concerned, we intend to extend our present therapeutic orientation to hygiene, body care and nutritional supplement.

In the valley of Deggenhausen (“Deggenhausertal”), where Sonett has its headquarters, there is hardly any tree not bearing mistletoes. Birches, fir trees, poplars, linden trees and almost every apple tree bear all sizes of those round shrubs. The leaves’ green is unusually ashen, and the white berries developing in winter suggest a greyish silvery core. But, whilst the kernel’s pulping in oil takes place, something truly surprising happens: The freshest, lushest green of springtime develops with the scent of newly cut grass. Carefully soaked up in olive oil, it has to be well protected from light up to the moment when it is further processed into a preparation using the juice extracted from the leaves and stems of the summer mistletoe.

Mistletoe differs from all other plants. Neither is it aligned with the course of the sun, nor trapped by the gravitational laws of earth.

Mistletoe also flowers and matures contrary to the course of the year. Its berry matures in winter and its evergreen leaves develop in summer. Never touching the ground, mistletoe spreads via its sticky berry being carried from tree to tree by birds’ peaks or in their faeces. This way it subsists on its own photosynthesis, in its own rhythm and autonomy. As long as the tree bears mistletoe, it is immune to its own death.

In times of old the druids especially revered mistletoe. In the Celts’ language, mistletoe is called the “all healing”. According to lore, the Celtic priest, clad in white, climbed the tree and cut off the mistletoe with a golden sickle. The mistletoe was caught in his tunic, not being allowed to touch the ground. It was the celestial purity of the mistletoe that was so profoundly revered, the mistletoe still being untouched by dark ground, death and disease.

In the Germanic Edda, the mistletoe is also of essential importance as far as the myth of Baldr’s death is concerned. Hel, Baldr’s mother, made all beings of the Earth vow to protect Baldr the shining one, exempting the mistletoe which was too young to be of any danger. Loki and Höðr took advantage of this. Following instructions given by the alert and cunning Loki, the blind Höðr inflicted the fatal blow on Baldr using the mistletoe. This resulted in the loss of the ancient clairvoyance, eventually leading to the destruction of the gods. It was Hel who declared that Baldr would return “when all living beings on earth will mourn him”.

This myth suggests a transformation of the mistletoe’s task. For the druids, the young and innocent being was the “all healing”. But even the mistletoe was not passed by by the Fall of Man, though passively; abused in its simple-mindedness by the adversary forces Loki and Höðr. One day, when human beings will mourn Baldr, i.e. when a new individual human sensitivity will have been attained, Baldr’s ancient clairvoyance will reappear in each individual as new awareness. 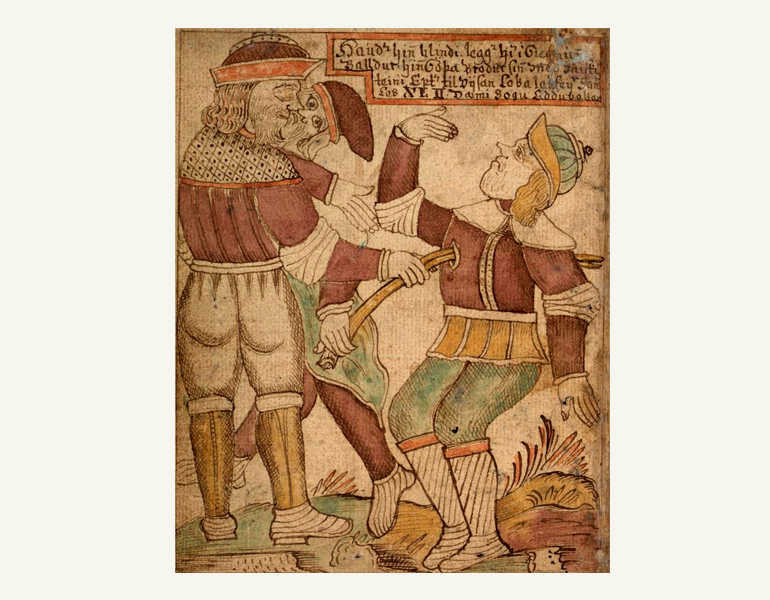 Baldr being killed by Höðr with a mistletoe following Loki’s instructions
(illustration from an 18th-century Icelandic manuscript).

The future of the mistletoe

Rudolf Steiner was the first person to discover mistletoe for the treatment of cancer disease, 100 years ago (1917). The novelty being that summer and mistletoe (leave and berry) were blended within a manufacturing process, i.e. no longer was the immediate effectiveness of the mistletoe substance paramount, but the method of its pulping. The polar opposites of summer and winter mistletoes are blended into a new unity. Thus, the transformed mistletoe can become an area of resonance for the human being whose task it is also to form a new whole between substance and spirit, self and world, in this way compensating them.